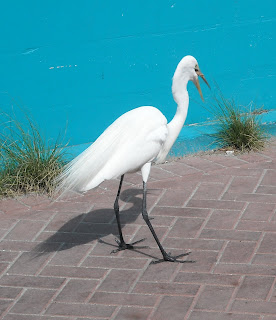 This is Bubba. He is a resident of Dunedin, FL, a quaint community along the Gulf of Mexico, near Clearwater.


Bubba is an EGRET...notice his dark legs. My husband told me how he learned, as a child, to distinguish egrets from herons. "E (for egret) = earth (meaning dark legs)" and "H (for heron) is close to G for golden". (Yes, this sounds a bit odd, but it works! 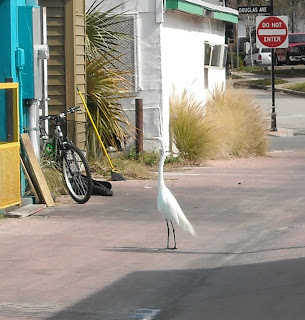 While taking a short cut through the alley behind Casa Tina, a "gourmet Mexican and vegetarian" restaurant, my friend, Becky (Lace and Lures), and I met Bubba. He was walking toward the back door of the restaurant. Obviously, Bubba was quite accustomed to humans. He totally ignored our presence as he made his was to the door.

Bubba walked up to the kitchen door and appeared to "knock". 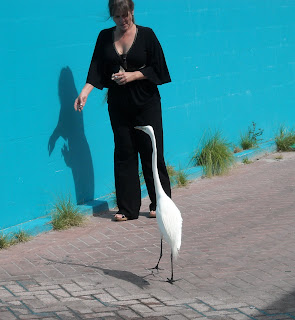 EVERYDAY, around noon, he arrives at Casa Tina for his snack. Bubba has an affinity for fried chunks of PORK! His friend in the kitchen comes out with a bag of these tasty treats. She explained that she had tried various meats and fish, but Bubba really seemed to prefer the pork. 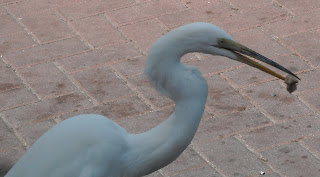 (This is a really GOOD restaurant! Bubba has great taste!) 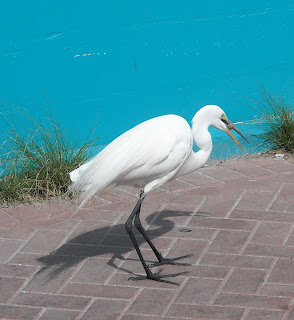 Bubba certainly stands out against the turquoise backdrop!

(Notice the pork in his beak... I wish I could have caught him in the act of swallowing...but he was TOO FAST for me!)


Thanks, Susan@ A Southern Daydreamer, for hosting Outdoor Wednesdays.
Posted by Jane at 12:05 PM

Such fun!! Thank you for sharing!

I go to Hilton Head SC often and had no idea they had different color legs. I need to remember this. Gosh you could probably set your watch from the time he eats his lunch every day:)
Joyce

Oh how cute! bubba is one lucky egret, that's for sure. But I wonder -- how does he get pork from a vegetarian restaurant? :-)
Cass

Bubba the egret better watch out. Too much pork might make him chubby and those are awfully thin legs!

This is so cute. He is so smart that little bird.

How cute, Bubba knows a good thing...you have a lovely blog!! I have three sons and I wonder about the empty nest one day, it is nice to read how you keep yourself very busy

wonderful...a tame egret is hard to find these days....

I'm always amazed at the beautiful photos you capture with your camera. Thanks for sharing them with all of us.

What great shots of Bubba! I am so glad you posted this because I had forgotten all about Casa Tina. When my parents lived on Anna Maria, they had an egret named Sally and a heron named George who came to visit them every day looking for handouts (which of course they received).

Thanks for the reminder of Casa Tina Jane!

This is one my favorite posts, ever! What a cute story, and I think it's so funny that he prefers pork to fish! What a neat story and your photos are great. I love the last one of Bubba against that beautiful blue wall. Thanks for the big smile today. Kathy

Jane, every time I come over to your blog and see the name, I think it suits you so well!! Adorable post!

First, I have to tell you that I use canola oil to fry my plantains before I forget.

I love Bubba and I love Casa Tina. I wish I wa munching on some of their Enchiladas Roja with veggies right now!

Next, let me help you a bit with identifying our egrets. Bubba is a Great Egret (but, we already know he's great), you can tell by his yellow bill and black feet. We also have Snowy Egrets, you can tell them apart from Bubba, because they have black beaks and yellow feet.

Jane, thank you for your thoughtful comment on my move. Everyone was so incredibly supportive and I can't thank everyone enough!

Love the egrets. We have them in our swampy lake and it's fun to follow them!
and OMG JANE!!! You are too sweet. Found a lil surprise in my mailbox yesterday and will be posting a pic on my blob later today.
Girl...........you are toooooo fun!

Beautiful photo of Bubba. You live in one of my favorite parts of Florida. Following your blog now - can't wait to see and read more. Jamie ;)

This is one smart bird! He knows where to go to fill his belly. This reminds me...I grew up in central FL out in the country at the edge of "Green Swamp". We lived on 40 acres with cattle, goats, chickens and then all the wildlife thrown in the mix. My mom used to feed this baby alligator in the pond by our house. Yes, illegal, but he was cute... And yes, he grew up to be about 4ft. He always showed up near the steps for his daily food. Long story short - my mom & dad had moved and my family was staying in their home until it sold. I worked nightshifts as a RN. One foggy morning, I came home from work around 7;30am and there was the gator wanting fed. I raised my arms and tried to scare him away, but he didn't move. HE WAS HUNGRY! I made my way in the house and called the game warden to trap him. I won't go into the rest of the details, but he was removed! Later gator!

I will get a gator blog going next week. My brother-in-law owns Gatorama!

I love your idea on Bright, Bold, and Beautiful about the crib railing!! Fabulous ~~

I've never seen one of these...look at their feet!! I read this post to my boys and showed them the photos and they were wide-eyed, lol. They had to stare at each photo...

Leigh of Tales from Bloggeritaville said...

If we get a second life...I want to come back as Bubba!

Oh my goodness - that is too funny!!