Whenever I hear the song "Singin' in the Rain" or watch the old movie with Gene Kelly, Debbie Reynolds, and Donald O'Conner, I remember the documentary I watched with my boys many, many years ago. (I think the eldest was about 12 at the time, the youngest was 8.) It showed how things seen on television and in movies are often illusions.

Ice cream, for instance...Picture those luscious cones of strawberry and vanilla ice cream you used to see on posters in the ice cream stores...the kind that make your mouth water and titillated your taste buds...The ice cream was actually Crisco! Yuk! (And to think it was those photos that started my pregnancy cravings for strawberry ice cream. If only I had known this fact, I probably would have saved myself 10 pounds!)


So what does this have to do with the movie "Singin' in the Rain"? Well...at the time this classic movie was filmed, water was one of those things that could not be captured on film (I think this has changed with new technology, but don't quote me on this.). For this classic song and dance, milk was added to the water so it could be seen. Gene Kelly was actually Singin' in the MILK.
http://www.imdb.com/title/tt0045152/trivia?tr0787834 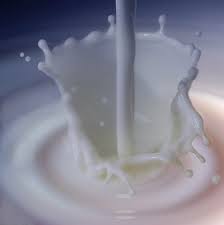 Now this interesting fact impressed my 3 sons.... who were all avid fans of musicals (and not one of them can sing worth two cents!) For months, they would go around the house singing..."I'm singing in the MILK, just singing in the Milk. What a glorious feeling, I'm happy ___" (they could not think of a word to rhyme with "milk" so they just garbled something) and trying to recreate the dance scene. These truly WISE GUYS actually poured  "accidently spilled " milk onto the floor and danced in it...singing (and laughing) at the tops of their lungs.

Interesting fact. Who doesn't enjoy that scene from the movie. Sorry about your floor mess.

What an interesting and educational post...lol. I never knew that about this beloved movie. So happy your boys enjoyed it as well.

That was cool to know. Never know when it might come up in Trivial Pursuit or something. Have a Happy Thanksgiving.

Really interesting information and a fun post, Jane! I love it! Reminds me of some of the things my four would do when they were that age. Hope your week is going well! Happy Thanksgiving!!

Singing in the Milk! What a fun and funny fact! I'll have to remember to share that on game night. We all love to gather trivia tidbits.

How funny and what an interesting factoid! When I was in junior high school, I had a teacher who was a bit actor and had done a few commercials as a child. He told us that he and his twin brother did one for bar soap and that the crew filled their hands with soap and shaving lotion to make it look rich and creamy. I think that's against the law now, lol.

Happy Thanksgiving! I'm going to be in Dunedin next weekend for some beach time!

Hilarious!! Who knew?!!! Love knowing about this fact!! Thanks for the fun post and Happy Thanksgiving, Jane!

Drawn to The Sea said...

A funny fact, made even funnier by the thought of your boys dancing in milk. And that page was a great read. But the strawberry Crisco is going to haunt me all day :-)

What a fun post. I had no idea that they were actually singing in the milk! The story about your boys just cracked me up. Did you see the recent Glee episode that used this song? I wonder if they had to use milk too? Kat

Thanks for a laugh today Jane. Your a funny one. Thanks so much for your lovely comments about my magazine article. xx

Crisco ice cream and milk rain?!! lol...that's crazy and fascinating! I would love to watch this with the boys.

PS Your description of your boys singing around the house makes me SMILE! You're such a good Mom...I can feel it in your words all the time and I LOVE that. <3

I popped over to your place from Lisa's Place...
So glad I did ! I saw "Singing in the Rain...er-um...I mean Milk" years ago in London.
I had NO idea. Amazing the things one can learn by just blog-hopping.
Happy Holly-Daze from ~sWaMpY~

Haha, that is so funny! Never knew that, and now I have a random fact for the day :)

I love this post! I can just picture it.... Gene Kelly, singing in the milk.