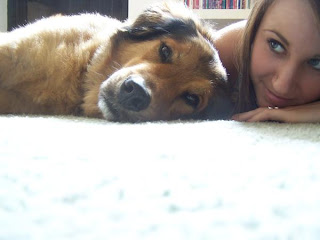 It was a dark and gloomy day... the perfect day to walk on the beach. Beach...did I really say beach? My lazy, four-legged friend heard the word and bounced off his bed, ran to the door and barked to go out. (This is the dog who hates to ride in cars!). Once outdoors, he headed straight for the car and begged to get in. Although DH and I had to change into appropriate gear, we let Rowdy into the car, where he sat patiently waiting for us to FINALLY come out. Our destination.... Honeymoon Island. This is a Florida State Park right down the street from our house. It has a wonderful "dog beach" where Rowdy, our 7 year-old Goldie mix can revel in sand and water...and play with doggy-friends. 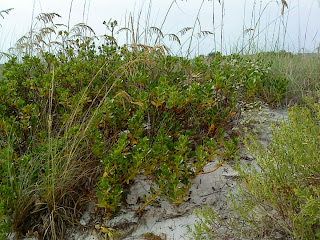 Due to the gloom, there were few cars in the parking area... just dog people, like us, out for a romp on a "cool" afternoon (meaning it was in the mid 80s). Walking on the path through the savannas, we met several hearty souls...and their dogs. The stroll to the beach was punctuated by the happy sounds of pups playing in the surf. As anxious as DH and I were to reach the beach, Rowdy spent countless minutes sniffing every blade of grass, every bush, every inch of the path... in other words, it took a half hour to reach the sand ( on a path that normally takes 5 minutes)!

Once there, Rowdy made a beeline for the water...pulled the leash right out of DH's hand and swam into the waves. He was actually body-surfing! Oops...there's a bird...Rowdy has to chase it NOW! Frantically grabbing for the leash, DH raced after Rowdy...before the Park Rangers caught us with a "loose" dog. 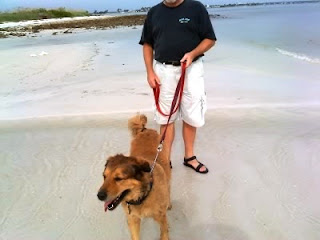 The biggest attraction at this beach is the companionship of other dogs. We visited with Boxers, Labs, Goldies, Wire Terriers, Great Danes, and mixed breeds, like Rowdy. All became fast friends after a bit of sniffing. 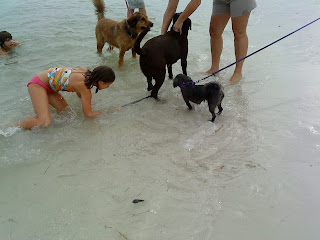 Notice the wet Chocolate Lab... he was pulling his young owners through the water like a jet ski. It was hilarious! The little wet Wire Terrier was experiencing her first time at the beach. She was a bit hesitant with the gentle waves and kept running back to the sand, but once she was wet, she loved it. Soon she began jumping into the waves.

While man and dog bonded with the new playmates, I walked along a tidal stream, formed at high tide. At this time, the tide was going out and the water in the stream was furiously making its way back to the gulf. Shells, rocks, and little creatures were rolling along with the power of the current. Oh to have a little boat to sail!

Notice the right side of the stream...the sand has been cut away by the current and is actually eroding with the onslaught of the flow. Large chunks of packed sand are breaking away, much like the glaciers and ice bergs we see in the National Geo films. I stood a little to close to the edge...and the sand washed out underneath my feet. Oops...there I was, laying on my ___ in the sand. Too bad there wasn't a film of this. It would have made a top contender for Funniest Home Video! 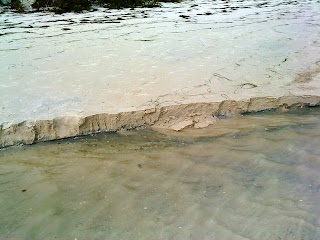 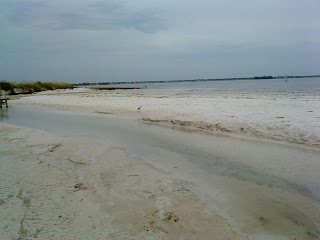 As the water receded, the sand crabs began appearing. You could see little holes all over the beach...and if you stood still long enough, you could catch a glimpse of the crabs dancing along the sand. The slightest movement and there they go... 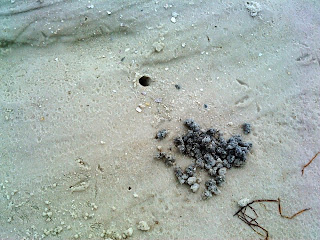 into their hole. The pellets of sand you see in
this photo are the bits of sand that this little crab has dug from his hole. If you look closely you can also see footprints of a rather large wading bird who had just walked along this path. 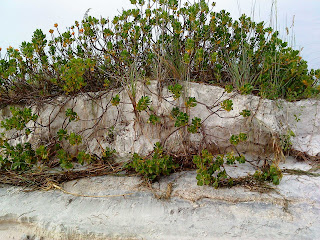 This is a dune, just above the tidal stream. You can see signs of erosion here, too. This erosion was caused by a coastal storm. But as you see, the plant life is already growing back and holding the dune together. Nature often heals itself. 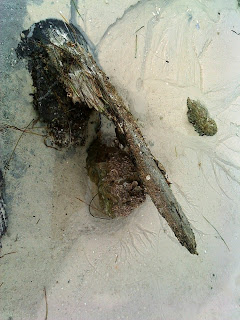 This bit of driftwood is actually a 16 foot post...part of the old break. Most of the post is buried under several feet of sand. Darn it!!! I was so hopeful that I had found a new piece of driftwood to add to my beach finds. It is truly awash with sand and tiny bits of shell.

I did find 2 additions of driftwood... once aired out, these will become a part of my coastal tablescape and used as part of a centerpiece. I love the treasures found at the beach!!! 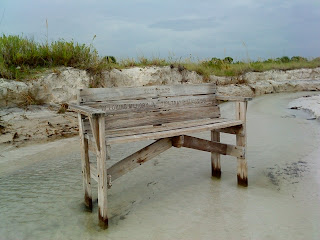 Benches like this one dot the landscape at Honeymoon Island. They are placed at the edge of the dunes, in the tidal pool area - like this one, and up near the paths. All have been donated as memorials to family and friends... and all are facing west to catch the best views of the sunset over the gulf. The back of this bench is carved with a name... and "Beloved Grandpa... His Favorite Fishing Spot". What a wonderful tribute to a lover of the sea....

Time to head home...the pup is exhausted from romping in the waves with his friends. Once in the car, he closes his eyes...and rests. At home, he heads for his bed where he dreams about his wonderful afternoon at Dog Beach.....

Thanks, Susan, for giving us the opportunity to share our outdoors with others.

I love the pictures. It's been way too long since i've been to the beach.

Oh I love the name Honeymoon Island. Great perspective and composition of your photos, just lovely!
My entry is here

Fun and enjoyable post~ Love the beach and the neat shots. Cindy

My Outdoor Wednesday is photos of surfers/the Gulf Waters...come on over test the water temperatures!! I'd love to have your company today.

What a nice commentary on your walk on the beach. Loved the photos of the dogs, the tidal stream, the driftwood, and the rest of the sights. Glad you were able to recover your dignity and got up to finish your walk! LOL
:-) Sue

Oh...sounds like you had a lot of fun!!! Thanks for the trip to the sea. I loved it.

Oh, I love your photos! I love the ocean so much, how wonderful to be able to drive to it. I loved your story, too. Thanks for taking me along!
Thank you for stopping by my blog and leaving a sweet comment. I love comments! Hugs, Cindy S.

Great photo's . LOve your dog on the beach. Have a nice day
Riet

Jane, it was almost as fun as being there with you! Thank you for taking us along on your outing and sharing your great pictures. Rowdy is a sweetie!

I love dark and gloomy days for beach walks, actually prefer them to sunny ones. This sounds like a fun beach..., and I just had a giggle..., the sand being washed away from underneath your feet and..., well, I hope you landed softly and had a laugh too.

Oh, and I finally added you to my blogroll too..., don't know what took me so long. Thanks so much Jane!

What a spectacular day you must have had. Thanks so much for sharing it with us. I hope you have a wonderful day.

OOOOOOOOOoo I love all the pictures !

Hi Jane, you know I love this post. I just added a link to it on my offering today, which is on The Meranova.

BTW, I love Coastal Cabana! I've never been to St. Augustine, but can understand why you would want to move there. I was on vacation in Neptune Beach in May and was supposed to go for a daytrip with my cousin. Remember May on the East Coast, when they had over 20-inches of rain, yep, that's when I was there. Rained six out of the seven days of my vacation, I mean it rained all day. Crazy.

What a lovely story! It was nice to walk along with you and I loved your finds!
I'm a big collector of driftwood, shells, beach rocks, and beach glass. I did a post about a driftwood find a few weeks ago. I want to find enough for my husband to make me some deck furniture!
You are lucky to have such a wonderful spot so nearby, and so dog friendly too!
Beautiful post! Beautiful pictures! Thanks for sharing it all with us!
All the best,
Eileen

I love this post! The gulf coast of Florida is so gorgeous. This is a wonderful spot, and your fur baby seems to have found alot of new friends. Love the shots of the bench, what a wonderful memorial. Happy OW. Kathy

Hi Jane,
Thank you for taking us along on this wonderful trip to the beach. I always enjoy stopping by to see you. You're an engaging and talented writer; and your photographs always reflect your artistic vision!

Thank you for faithfully commenting on my blog and for the compliment! (I thought I left you a comment on here the other day but I don't see it). I haven't been to the beach yet this summer - need to go! I'll live vicariously through yours!!