Up until about 4 years ago, I had not particularly cared for roosters...at least in my home. That all changed as I was walking down the street in Santa Fe, NM and spied a store window decorated with the most hilarious conglomeration of roosters. They were so funny that I broke out in laughter...right there on the street. Of course I had to go into the store.... and I purchased my first two roosters. 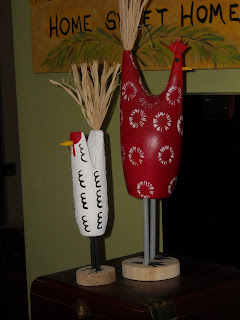 These roosters are handcarved and painted by Navajo
folk artists. Each one is signed. The red rooster was created by Edith and Guy John.


And thus began my love of "humorous" roosters and chickens. 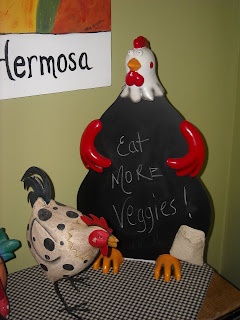 These guys were found at Home Goods. The chalkboard rooster has been the recipient of unusual writings.
The polkadot chicken looks as though it's ready to eat...or getting ready to sit on her nest. At Christmas, my DIL fashioned a nest with greenery and placed a few red ornaments in it. It was adorable! and a real conversation piece. 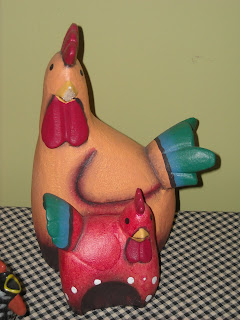 These two chicks were a gift from D and C. They were purchased in Switzerland. A third chick was a part of the set, but she was a snack for Hurley. 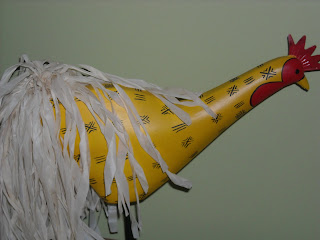 The yellow rooster is from Pier One... and it was a gift from C., my daughter-in-law. She thought it would make me laugh... and she was right! 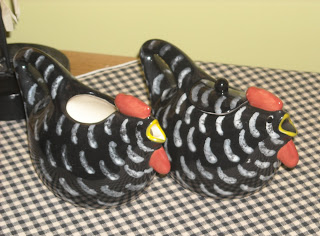 The black and white sugar and creamer were a gift from my sister. She found them at Home Goods.

Below, you will see why everyone decided to give me roosters.... 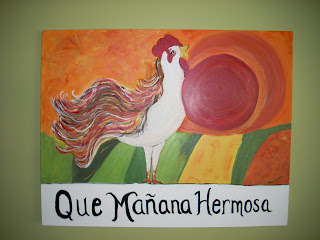 I painted this whimsical rooster when I was housebound... it was the catalyst for my small collection. The translation of the saying at the bottom... Oh what a beautiful morning! Through the fall and spring, this painting decorates our breakfast room. 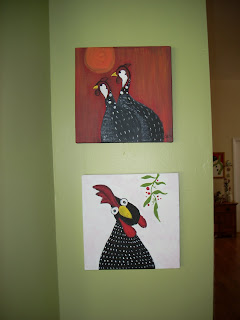 These two small paintings are also mine... and the last of my
rooster/chicken painting.


Thank you for stopping by today... hope my roosters made you smile!
Posted by Jane at 1:36 PM

Jane, I am linking you as soon as this posts. So glad to have you with us, sweetie. Love your pics.

You are a very talented artist. It sounds like you have turned into a rooster gal. The ones from Santa Fe are incredible.

I love your fun paintings! You have an adorable collections of hens & roosters! Thanks so much for sharing.

I love your paintings most of all! You are very talented and I love your eye for color!
Really beautiful!
All the best,
Eileen

Jane...ok...I was trying to have some semblance of order as I go rooster partying...but then I went to my dashboard & thought I need to catch up with my blog reading...and oh, wait you're on that list too...so here I am :o)


Love, love, (I tend to repeat myself, but it is true) love your paintings., especially the rooster fella on the bottom...He's looking like he's saying..."you looking at me?"

You have such a unique collection of roosters.....I really love them all. Your chalkboard is so cute too...think I'd really like to have one like that! Elaine :)

Jane, I know just the Santa Fe shop you found these guys. They are wonderful! I was in Santa Fe in July and was invited to dinner at the home of someone who had the most amazing rooster collection in her kitchen. I wish I could have taken each and everyone of them home with me.
I enjoyed my visit. You have a great collection. I really like your painting!

Thanks for sharing. Hope to see you at my place for more rooster fun.
hyacinthforthesoul.blogspot.com

you have the most humorous collection I've seen yet. I love them

I enjoyed seeing all your whimsical roosters and hens!

I love your paintings. Funny and colorful. My favorite. Happy Rooster Day

I love your painted roosters.
You're impressively talented!

You know I love your chickens and roosters!

I Love your Roosters... I am having a give away Please try to stop by...
xoxo
Julie

Jane, I just loved your story behind each rooster! They are so much fun (I love cute faces :) Thank you for your frequent comments on my blog! Much appreciated!!
xo
Maria

Your paintings did more than make me smile I actually chuckled out loud. Those big eyes are so cute. Looks like he's saying "You talking to me?" in a Robert DeNero voice.

Such a fun post. Great roosters. Beautiful work in those paintings! :)

Hi Jane, I so love your roosters! I don't have any here, but if I did they would be more on the lines of yours. BUT, I had actually planned to take part in this event and post the picture of the rooster my son has sitting on his backyard tiki bar, it is so funny. You know exactly how artist types are, so a rooster on a tiki bar makes perfect sense. lol.

I ended up taking last week off, so I'm out visiting and catching up. Are you going to the Studio Waltz in October?

A lovely rooster collection and I am in awe of your paintings!! I love them! How talented you are. And yes, your roosters did make me smile.

So sorry it took so long for me to come by. I tried and tried to get to the bottom of that list...lol!!

Have a wonderful weekend, Jane!