Being from a Cuban/Sicilian/English (yeah...I'm really mixed up!) family, I grew up eating FRIJOLES NEGROS (black beans...for those non-Spanish speaking readers). My mom would buy dried black beans, soak them for hours, pick through them for stones, and cook them until tender for several more hours (and the house would stink!). Then she would start adding the magic...onions, green pepper, tomato, garlic, and tons of spices. Mmmm...it was always so good. But it always took soooooooo long until we could eat them.
(photo from foodnetwork.com)

10 years ago:
Then she discovered Black Beans in a can...already precooked and ready to be seasoned. This was an huge improvement...and time-saver (and nose saver!). When she had to make the GALLONS of beans for our Christmas family reunion, she would use these canned beans to prepare small batches and freeze them, beginning at the first of December. That was so much easier and they tasted just as good. 7 years ago:
Then along comes, Jane...always looking for ways to streamline kitchen time. Because of a kitchen disaster when company was coming for a Cuban meal (I BURNED the beans), I ran to the local Italian/Spanish grocery and grabbed a few cans of El Ebro Black Beans / Cuban Style. These beans were a life-saver!!! All I did was open the cans and add a little onion, tomato, and green pepper, which had been sweat in olive oil. And no one but MacDaddy knew the difference. Now these are the beans of choice when I need to make them.


Christmas:
Mom, the provider of the Black Beans for our Christmas feast, is having trouble remembering things like "how much" is needed for a crowd (not to mention who her kids are), but she still wanted to make the beans. Big Brother helped her with this chore and made enough for about 30 servings. I brought the rest...El Ebro, of course, still in the cans, to add as needed to the pot. (The crowd ate another 10 cans worth.) Nobody noticed the difference.

5 days later:
My sister stopped at the Italian/Spanish grocery to get a few things to take back to Mt. Dora with her. Among her items were several cans of El Ebro Black Beans. The market owner's wife was at the check-out counter and told my sister that these cans were all she now used...she just added a little Sofrito (you can find this in the Ethnic food aisles or the freezer of many stores, at Caribbean markets, Hispanic markets, online or you can try the recipe below...


So...if you want some really good Frijoles Negros (black beans), you can make them from scratch using Mom's (before canned) "recipe":
Grandma DelValle's Frijoles Negros
Soak 1 bag of black beans, overnight. Rinse and drain them. Remove any gravel. Put in a large pot or salted water and bring to a boil. Reduce heat to medium low and cook until the beans are tender.  In a frying pan, pour a little olive oil and heat it. Add 1 medium onion, chopped; 1 bell (green) pepper, chopped; 3-4 Roma tomatoes, chopped; mince 3-4 garlic cloves and add to oil. Cook these until the onion is translucent, the pepper is soft, and the tomatoes are cooked. Add to the beans. Season the beans to taste with salt, pepper, (cilantro, if desired) and a little parsley. Add a little splash of apple cider vinegar. Stir and simmer until the beans are very tender. Mash some of the beans with the back of a wooden spoon. Simmer until thickened. Serve with rice (white or yellow) and chopped onions.

Or you can try Bobby Flay's recipe:  http://www.foodnetwork.com/recipes/throwdown-with-bobby-flay/black-beans-frijoles-negros-recipe/index.html

Or, if you are like me...get a can or two of El Ebro Black Beans /Cuban Style, add Sofrito and your guests will never know...if you throw out the trash. 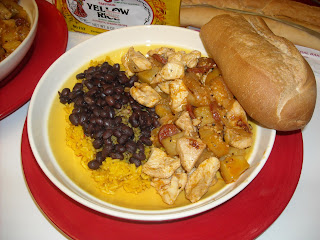 You can find the recipe for Chicken Salteado in my February 2010 archives. It's simple, quick and delicious!!!

Makes about 4 cups
Chop the onion and cubanelle or Italian peppers in the work bowl of a food processor until coarsely chopped. With the motor running, add the remaining ingredients one at a time and process until smooth. The sofrito will keep in the refrigerator for up to 3 days. It also freezes beautifully.


If you can’t find ajices dulces or culantro, don’t sweat. Up the amount of cilantro to 1 1l2 bunches.
I am joining...albeit late...Foodie Friday at http://designsbygollum.blogspot.com Visit all the other "foodies" for some great recipes...
Have a great weekend -
Jane

Oh Jane, I always love it when you cook Cuban, one of my favorite cuisines. I love rice and beans, whether it's Cuban or Southern. I'm going to look for the Sofrito in the jar to go with my beans in a can. Ain't life grand (and so much easier).

Ohhhhhhhhhh, yum, yum. Truly. I love these foods. My two sisters in law are both of Spanish American descent, and one was a great cook. She taught me how to make so many of her dishes from scratch like refried beans and my own corn or flour tortillas. Of course the 'from scratch' were always a special treat, I've also learned to cut corners when time isn't working with me. I love to experiment too.

Thanks for this, I would definitely try this....the 'easier way'. LOL

Have a great weekend, and thanks for visiting.

I LOVE black beans, and I'm definitely going to look for the canned ones you recommend. Now if only someone could come up with some canned black eyed peas that were actually good! Kat

How did you know I was looking for bean recipes for my vegetarian son? Did Shellbelle tell you? Ha-Ha! I think I will try your version first. Thanks Jane!

I live in Clearwater and I often make black bean soup or black beans/rice. I also buy the frozen "sofrito" blend in the freezer section of Publix. It does have have the tomatoes in it but says "sofrito" on the package. Just onion and peppers.
I see the jarred sofrito in the ethnic aisle and now I will try that.
thanks for the tips and I'm going to check out your recipe you listed, too.

Should read "It does NOT have the tomatoes in it..."

Melanie, I often just use the fresh "trinity" mix that Publix carries in the produce section (already diced) and add the cilantro or parsley. I freeze whatever I do not use. The "freezer" Sofrito was shared with my by a Puerto Rican friend...good, but it has MSG, with my husband cannot have...
Jane

Hi Jane!
Thanks for your very sweet comments today on my blog.
I just added some more "stuff" on the post about the ole Rolling Stones, relating it to the Paint It Black post. (typical, I get in the shower and think ..and then I remember things I forgot to add to a post and have to run back and edit! LOL!...check it out if you have time....all about the Rolling Stones Paint It Black)

My husband makes an awesome pot of pinto beans alot. But I do love black beans too & they're so healthy.
We vacationed in Costa Rica and love how they have black beans with almost every meal.

Have a wonderful weekend in sunny FL!!
xoxo

Jane, thanks for visiting my blog. I hope you will try the cornbread...and yes, it is easy!
This is my first visit to your blog and I have gone back and read the whole year! I feel like I know you and WAR EAGLE! We cannot wait til Monday night. It is duck season! Here in N. Ala, we are expecting 4 to 7 inches of snow!
Blessings,
bcp

Now that's how I like to cook. Your recipe sounds so good. I cooked from scratch 40 years ago but now it tastes just as good if you find the right products. Thanks for sharing.

Now, THAT looks delicious, Jane! I love black beans served any way you can serve them. I could eat my weight in black bean soup!

I've been thinking about you today and hoping that we can get together with Rhonda to celebrate some this new year. Let's go to the tea room in Brandon and have a girls day out!

Happy New Year to you...

I love black beans! Thanks for sharing. Happy New Year to you Jane. xx

I love black beans and rice. The first time I had it was at the Columbia Restaurant in Tampa when I was around 13 or 14. I make mine the old fashioned way by soaking my beans but I will try your recipe next time.