Our beloved Auburn Tigers are the  NATIONAL
CHAMPIONS!


What an incredible game!!! Auburn and Oregon banged heads (and shoulders, arms, legs, etc.) in one of the most exciting football games I have ever seen.

The celebrations in Auburn...in spite of the snow, ice, and freezing temperatures...centered around Toomer's Corner. Traditionally, when Auburn wins, crowds gather at the main intersection of downtown Auburn and the campus - across from Toomer's Drug Store - and roll the old live oak trees with thousands of rolls of toilet paper. Why? Who knows. But this tradition has been around forever... (Cherry pickers are permanently stationed nearby for the cleanup.)  As you can see in the photo, THOUSANDS of fans were on hand...and the trees are virtually hidden beneath the streamers of white tissue. It's a BEAUTIFUL sight...

Michael Dyer (DIL's "boyfriend) is a freshman...and the offensive player of the game. He had not only the run that set up the last second WINNING field goal, he had a "once-in-a-lifetime" run...tackled after a good run, but never touching the ground, he got off the Oregon player...and continued to run for a major 37 yd. gain. You gotta love this little guy...not very tall, but he has the most powerful legs which never quit. He's going to be a player to watch...

Nick Fairley...defensive player of the game.
This guy is incredible! All season, he has wreaked havoc
on the opposing teams...particularly the quarterbacks.
Be watching for him in the NFL...

Aubie, our mascot, and Mr. Penny showing their push-up style.
This is a neat story about the Auburn Family...
Mr. Penny is the school crossing guard and janitor at Auburn Elementary school. He has lived in Auburn/Opelika forever...and has attended every home game. At the games, Mr. Penny did push-ups with each score...with good plays...with first downs...You get the idea! He's a true fan!

He wanted to go to the BCS game, but of course, the cost was completely out of reach. So....the parents of Auburn Elementary began a campaign to raise the money for Mr. Penny to go to the game in Glendale, AZ. (after all, Mr. Penny is a BIG part of the Auburn Family) The results...his hotel was given by a fan, his airline ticket was donated by a fan, a ticket was given to him...and over $6000 was raised. Mr. Penny took his very first trip on an airplane...out of the state of AL...etc. And HE WAS THERE to watch his beloved team...That's FAMILY! 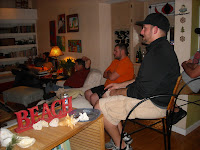 How did we watch the game?
with friends, family, four dogs, and LOTS of food.

As much as we wanted to go to AZ for the game, ticket prices were untouchable for us...last price I saw was $4800 for ONE ticket! 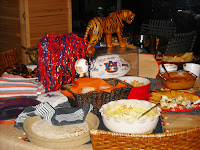 The ticket brokers were even returning fans' money because tickets were unavailable. Stubhub said this was the hardest ticket to get since the opening ceremonies at the Olympics in China! 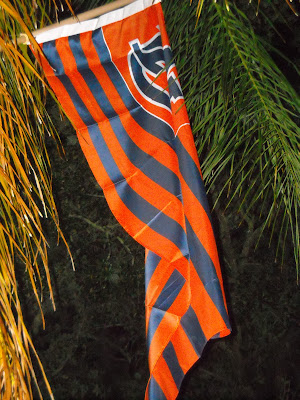 At the end of the game, MacDaddy and WG traipsed outside with the extension ladder and ceremoniously replaced the weather-beaten, faded Auburn flag, which has been waving over our home for the past football season, with a brand new, "United Auburn" flag.
Bring on the next season...
(Can't believe we have to wait 8 months for college football to return...)
WAR EAGLE!
Jane
Posted by Jane at 2:18 PM

Yep, you won. And WHO KNEW two strong OFFENSIVE teams could turn up such a "heated" DEFENSIVE battle?

I was so happy to see that they won! My brother is a proud Auburn alumn, and I was afraid that he would go into a horrible depression if they didn't lol. Kat

You are a riot! Glad your team won. That was an awesome story about Mr. Penny! I can imagine it was rather loud at your house during the game! Sounds like fun!

War Eagle, Jane! I am so excited Auburn won. YEA! Loved reading this post, and how absolutely wonderful that the janitor of the elementary got to go see them play. That was such a heartwarming story! Loved every word.

I just emailed you a detailed list of info about St. Augustine. Hope it helps. You need to come downtown and find me the next time you go to Crescent Beach!

YAY Auburn!! whoa, never thought I'd see myself type that!! Heh. and YAY SEC!!! We have dominated the national championship for the last 5 yrs!!! We are good, what can we say?
Your house looked like a blast and I can only imagine the screaming that took place when the guy got back up and ran for 37 more yards....hell, I was screaming about ya'll screaming!! My boyfriend says....you don't even know those folks...and I said, Oh yes, I do! And come Feb 6-10 I'll be in THEIR neck of the woods!!!!
War Eagle!!
p.s. les miles ain't goin' nowhere. :(