Here in Central Florida, we have some of the most beautiful summer skies. These photos are taken within minutes of each other. While returning to my car...in the rain...I looked up to see this gorgeous display.
. 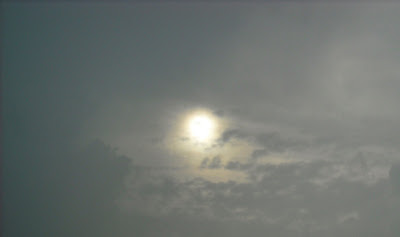 In a completely gray sky, the sun peeked through...to the left was the most ominous black cloud...lightning flashed toward the ground and the "boom" was only 3 Mississippis away.
Turning slightly to the right, the skies changed - the sun reflected on the puffy white clouds...
Whenever I see the sun bursting through the clouds like this, I am reminded that God is always there...
Even in the rain...the gloom...the storm...
He is with us. 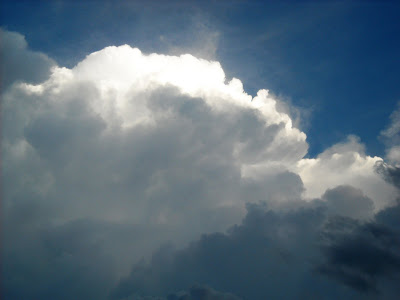 This was the first peek of blue skies I had seen in 4 days! 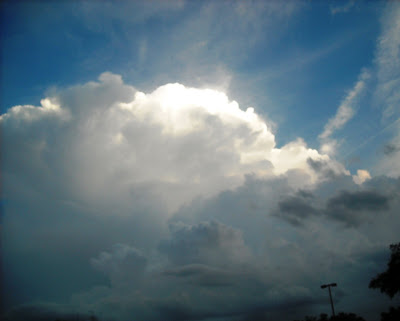 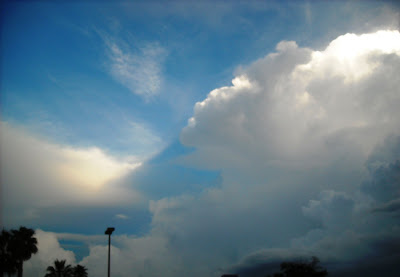 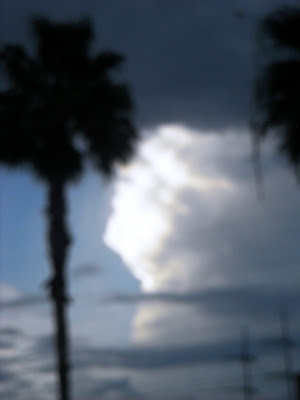 Again, I turned slightly to the right and there were whispy gray clouds...they continued to build, as did that thunderhead and the rains poured from the heavens once more.
Just another day in paradise...
Jane
Posted by Jane at 1:58 AM 12 comments:

Today was filled with great news...my Mom has had a change in her attitude. She sounds more like her fighting self and is WALKING...with her fancy-dancy walker, of course. She says she has to "get moving so she can go home again!" Now this sounds like my momma!!! Yippee!!!
Thanks for all your prayers and good thoughts. They were truly felt and appreciated. 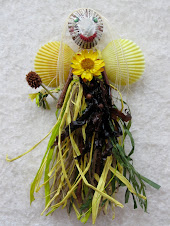 I also want to introduce you to my new friend, Prudence (http://flotsamfriends.blogspot.com). This creative lady has a wonderful tutorial on her blog, sharing how to make her delightful Flotsam Friends. These little dolls are created with driftwood, shells, raffia, and MAC makeup(!), among other everyday items. Please check her out...
Hugs,
Jane
Posted by Jane at 7:05 PM 8 comments:

That word says it all... I am PREOCCUPIED. 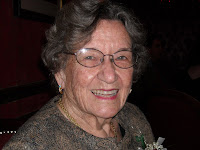 The past 10 days have been absolutely crazy...first, Mom (91) fell and cut her head. Why? After 6 days in the hospital and an incredible number of tests, it was determined that she has crystals which shook loose in her ears (fixed, for the moment), that she has a virus in her blood stream, and that the arteries to her brain have narrowed, thus slowing the blood flow and causing dizziness. (This is the second time since April, that she has had extreme dizziness...first time, she had a mini stroke.) Surgery? Not at 91 yrs old! So now she is in nursing care, until she can learn to live with the dizziness....lots of commuting back and forth to her facility. It's an hour away... 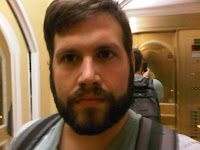 This past weekend, my middle son, Music Guy, came home for a visit...the first in several months. Boy, do I love when he comes!!! I get to cook his favorite dishes (all contraband to my diet) and he always cleans up my computer for me. (All my boys could do this, but MG doesn't make fun of me when I ask "stupid" questions. He always tells me he is the "good son".) We had a wonderful time with him...and had a BBQ with all the guys and their ladies...and Drummer Boy did the cooking!!! (8 lbs of ribs, BBQ pork, beans, mac and cheese, cole slaw, fresh fruit, garlic bread) Lots of laughter...lots of food...lots of teasing...lots of LOVE. 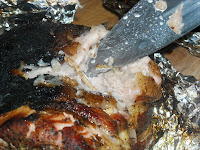 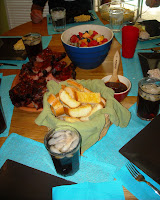 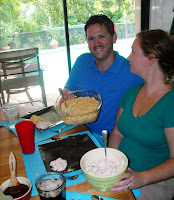 Wine Guy and his lady, Jujie 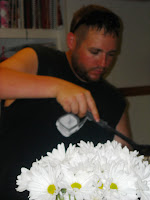 
Painting.... I am in "painting mode". Up until the dawn cracks (or is that noise my bones from sitting so long?) I am getting ready for the next Art House in early October, plus working on a couple of commissioned pieces. And I am working on the next two "creativity" presentations I will be doing in the next few weeks... 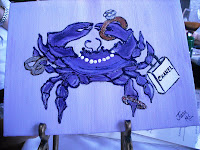 commissioned for Cindy's birthday...loves crabs, jewelry, and Chanel. The "diamond" ring shines with metallic gold and hints of sparkle, the rings are shiny gold, the bracelet is gold and "ruby" metallic, and the "pearls" are iridescent. It's a Crab with BLING...just like Cindy. :-) 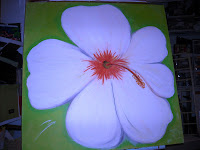 So...I will not be posting much for awhile. But I will try to keep up with your beautiful posts.
I'll see you soon.... 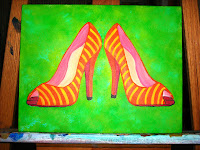 I am so excited!!! I just heard from my brother. The shoe painting was a hit! The presentation last night was supposed to go something like this (at least that was the plan).

If you were a football fan, I could say it's like (a player) taking over for Bear Bryant. But, you don't like football. If you were a basketball fan, I could say it's like (a player) filling in for Michael Jordan. But, you don't like basketball. So..... here's something you might understand... and Big B presented the painting of the REALLY BIG (Christian Louboutin inspired) SHOES to her in a Neiman's shopping bag. She recognized the CL design...loved the bold bright colors, and declared to the 70 or so in the audience that this painting was going to hang in her law office.

Last Sunday, I received a phone call from my big brother. He began with this... "I have NEVER asked anything of Jane, the Artist." OK......where was he going with this? Is this a set-up?

To understand my thoughts, you need to know that my brother rarely calls...he's hardly ever in town and when he is it's usually for a case he's working on. And, yes, since I was no longer needed as a free babysitter (his kids are now parents), he has asked nothing major of me. And he has a very droll sense of humor...

"I need a painting of a really BIG pair of shoes. This painting will be part of my speech as I take over the position...The outgoing person is a very flamboyant woman who loves color and designer clothing, and she wears really high heels. I want you to use all the colors she uses in her color coded charts...and I want really HIGH heels, with stripes. Oh, and by the way, I need this to be in San Francisco on Friday. Can you do it for me?"

OK..... after many sleepless nights (late night is my preferred time for painting) this is what developed... 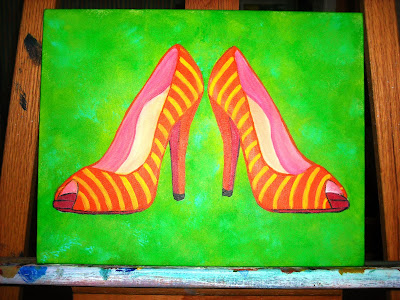 Wish I was a fly on the wall so I could hear his speech and see the reaction to my painting.... 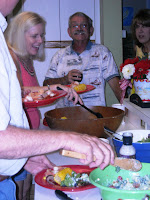 We have a group of friends who have been gathering for Bible study every month for the past 15 years. Often we combine our study with a meal. There is nothing better than breaking bread with good friends... After many years of hosting this study in our home each month, our friends began to take turns...and I really LIKE that. This month, it was OUR turn...and we decided it was time for a dinner...a SHRIMP BOIL aka Frogmore Stew. 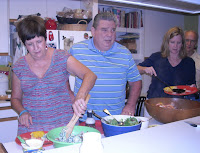 Now this is something easy to do...especially if you ask everyone to bring a dish and their beverage of choice...and a pound of raw shrimp. (I provided tea, soft drinks, coffee, and "Rum Funnies"...our group's special concoction of coconut rum, lemonade, pineapple juice, and Sprite...originally made for my 50th birthday. (We used Pomegranate juice, in place of the pineapple juice, and added mint, this time.) When our guests arrived, we had 3 huge pots filled with boiling water, ready to go. After indulging in fabulous appetizers, MacDaddy added Zatarin's Crab Boil to the water and tossed in the sliced sausage. Next, we added fresh ears of corn, broken in half. We planned for them to be cooking for about 5 minutes. The final three minutes, we added shrimp...15 pounds!!! 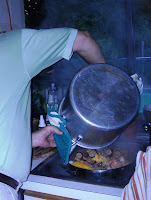 When all was cooked, the pots were drained and the glorious mess was poured into a GIANT wooden bowl and placed on the counter for serving.

Our menu included salads, cornbread and garlic bread, and fresh fruit. Guests also brought a deliciously rich German Chocolate cake and a fabulous trifle. We ate until we were stuffed!!! With all that shrimp and sausage, all that was left was 5 pieces of corn and 4 sliced of sausage!!! I think the PIG holding the wetnaps said it all..... oink oink! 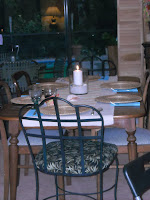 The 3 tables were simply set...the focus was on the food. For the large table I used a natural linen fabric runner, rattan chargers, coral colored plates, turquoise napkins and simple shells and containers with beach sand and candles. On the smaller tables, I used table cloths made from the natural linen fabric and a colorful square of fabric (cabana stripes in coral, turquoise, yellow, lime green, and white) as an overlay. White with yellow bowls were on each table to hold the shrimp waste. Some of the larger shells were used to hold wet napkins...and on the buffet, a wavy clam shell held additional napkins. 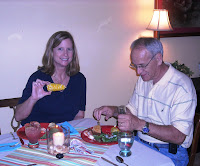 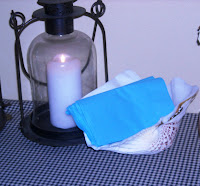 This meal was such a hit that one of the guests called on Monday to get the recipe for Frogmore Stew. He and his wife prepared this meal for 40 guests the following weekend...

***Small red potatoes can be added to this dish...cut in half and cook with the Crab Boil for 20 minutes, then add the remaining ingredients as suggested.
***Old Bay Seasoning may be used in place of Zatarin's, if you prefer. Adjust to taste.
Posted by Jane at 12:04 PM 10 comments: