Wishing you a happy, healthy, and an adventurous
NEW YEAR...
filled with LOVE.
Jane
Posted by Jane at 10:16 AM 9 comments:

Today, I had the most amazing experience...and NO CAMERA!!!

I was visiting my brother's home and passed a pond in his neighborhood...FILLED with the most incredible birds... (I am borrowing photos from National Geographic and other online sources.)

What first caught my eye were the 30+  ANHINGAS floating and diving in the pond. As I left, they were all sitting together, drying their wings...

BLUE HERONS were scattered along the shore. Interestingly, they seemed to be spaced apart at equal distances. I wonder if that was a territorial thing or just a coincidence. My SIL and I counted 8 of these beauties... 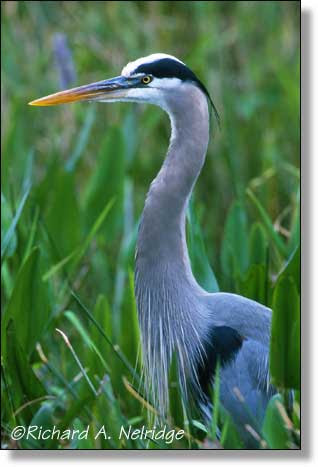 Of course, there were many EGRETS feeding...and walking about...

The most amazing birds were 3 rare WOODSTORKS wandering together along the banks...and a few more at random points of land. We counted a total of 7...

All in all...there were about 100 wild birds in this one medium-sized pond. I hope to head back there tomorrow...just in case the birds are still hanging around...and I'll BRING MY CAMERA!!!
I am linking up with Outdoor Wednesday.
Posted by Jane at 5:10 PM 4 comments:

MERRY CHRISTMAS FROM OUR HOUSE TO YOURS... 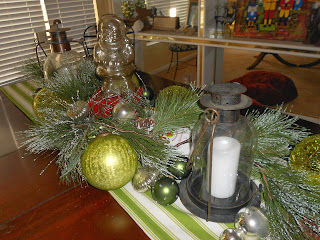 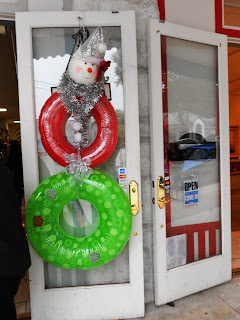 This weekend, my (patient) husband and I drove my sweet mama up to my sister's home in Mt. Dora...in central FL. For the first day in a month, the skies were gloomy...no rain, just clouds and gray....and the colors of Florida were truly displayed against the soft backdrop...
Posted by Jane at 11:44 AM 9 comments:

Last night was our neighborhood's annual cookie exchange. As usual, it was so much fun...and delicious!!!
And, of course, I forgot my camera! DUH!!!


This is a photo taken from my friend's phone. As you can see...there are so many wonderful offerings...everything from the classic Peanut Blossoms to cupcake "Christmas Trees" (these were so cute...a regular-sized cupcake, with a mini cuppie and cookie star on top). There were Ritz Cracker/Peanut Butter Sandwich Cookies (covered in dark chocolate and red melts), Pretzel-Toffee cookies, Chocolate Crinkles and Chocolate Chips, Classic Shortbread and Peppermint Cookies, Apricot Bars, Decadent Oreo No-Bake Cookies, and 2 kinds of Buckeye Candies...one in the traditional "buckeye" form, the other shaped like little MICE...sliced almonds for ears, skinny fruit roll-up for the tail. SO CUTE! 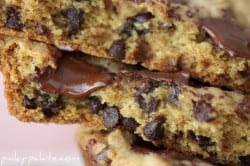 
I made a few adjustments with the size (I used a Whoopie pie pan in place of the muffin top pan...made 4 oz. cookies), plus added an additional bit of caramel sauce on the top (drizzled it from the tines of a fork).


These cookies were truly fabulous! (Yes, I splurged and tasted one, or two...or five!) And they won our CE contest for best tasting cookie. Here's the link for the recipe. TRULY...you have GOT to try these!!! (photo is from picky-palate.com)
http://picky-palate.com/2010/05/20/salted-caramel-dark-chocolate-chunk-cookies-the-la-cookie/ 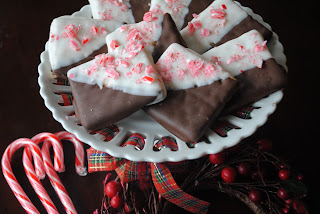 I also made Chocolate Covered Grahams...again, thanks to a blogger.
(photo is from Shugarysweets.com)


I had difficulty with "dipping"...not because of the recipe, but because I am too impatient!...so I used a knife to spread the chocolates. I also pulverized the candy canes in my processor...to DUST. For me, this was better than biting into peppermint candy...which my teeth don't like very much.
http://www.shugarysweets.com/2011/12/chocolate-peppermint-grahams.html

Since I am unable not supposed to indulge in sweets, I used the neighborhood ladies...and their families...to test these recipes. And they were both HITS. And now that they have passed the "neighborhood test", I'll be making them for our Christmas party.

To get motivated to finish decorating. 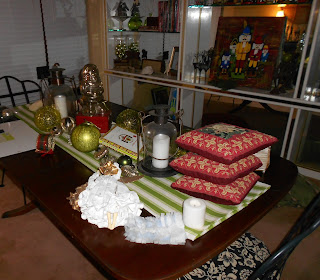 I started...and the tree is done 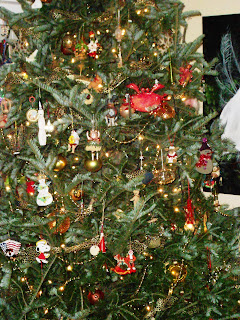 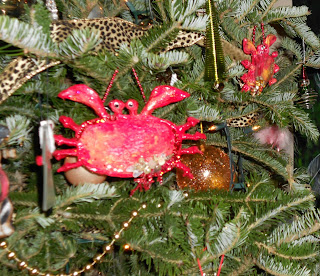 Special ornaments are in place... 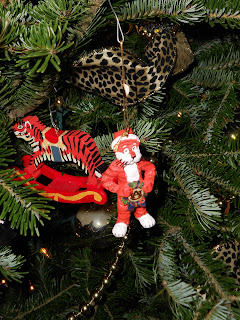 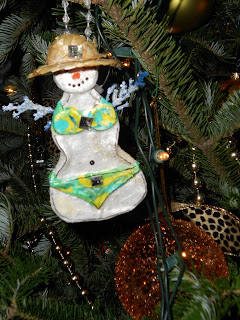 And so is the mantle (except for the candles and stockings, and a bit more garland)... 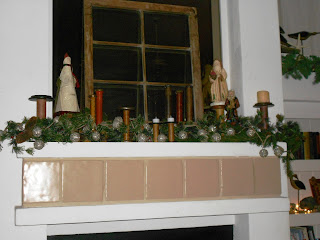 But what did I do today? 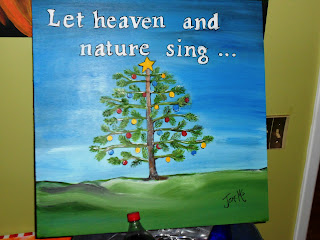 I painted! (and it felt GOOD!) 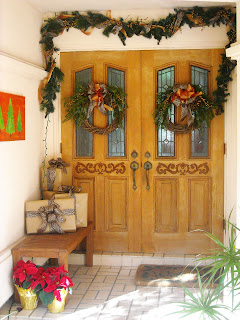 Tomorrow, I will complete the entrance...and the new painting will hang above the bench (this was last year's entrance)
And all will be merry and bright...
Merry Christmas!
Jane
Posted by Jane at 11:54 PM 9 comments: 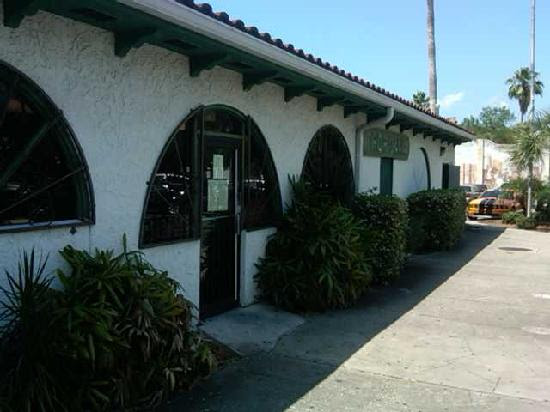 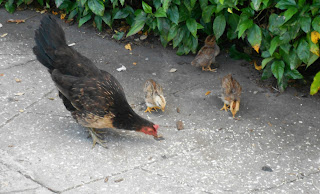 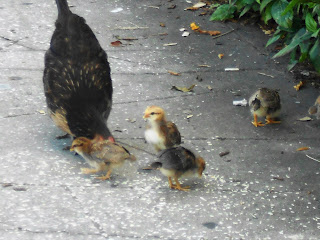 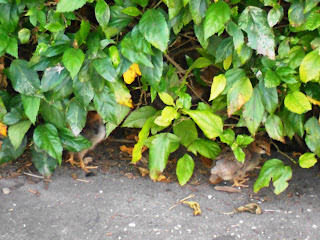 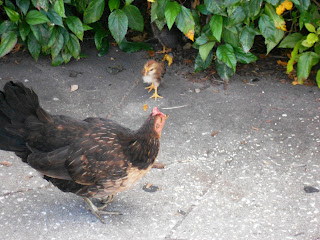 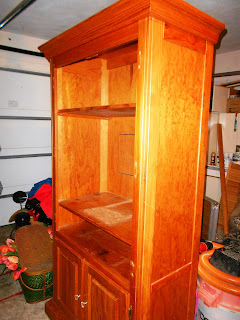 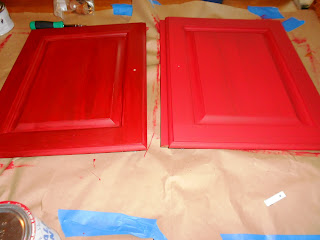 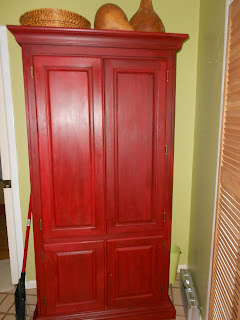