For the past 2 weeks, I have been testing baked donut recipes to use in my new Donut Flexi-pan. Although the pumpkin donut recipe that's floating around Pinterest is tasty...MacDaddy is not a fan of pumpkin (except for pumpkin pie). The other recipes I have tested ended up in the trash... 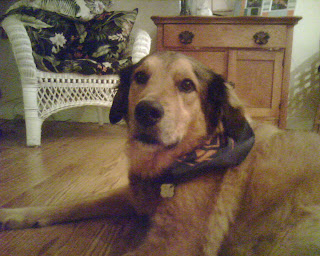 except for the small plate that Rowdy snitched. (Doesn't he look innocent?)

This morning, I tried one more...and SCORE! It was delicious!!!

The texture was closest to a "DD" cake donut...fluffy and light...but without that "fried" taste. It worked beautifully in my new Donut Flexi-pan! 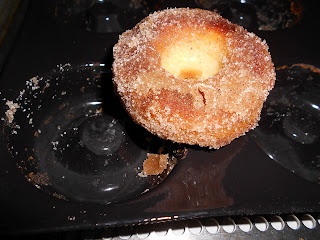 They were especially good after I dipped them in melted butter and cinnamon-sugar. (But then, what isn't good with butter/cinnamon-sugar?) 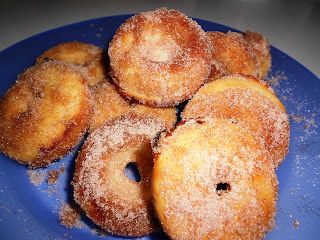 Baked Donuts
(Recipe is from Wilton)

1.  Preheat oven to 425 degrees F. (If using a Flexi-pan, do not spray/grease donut wells. If using a conventional pan, be sure to prep the pan)

2.  Sift cake flour, sugar, baking powder, nutmeg, and salt together into a large mixing bowl. Stir in buttermilk, eggs, and melted butter. Mix until just combined. (Do not overmix!) Fill each donut well about 2/3 full.

3.  Bake 7-9 minutes***, or until the top of the donuts spring back when touched. Cool in pan for about 3-4 minutes before removing the donuts.

4.  Dip each donut into melted butter, then into cinnamon-sugar.

These donuts are best when eaten the day you prepare them!

***Using the Donut Flexi-pan, in my oven, it took about 15 minutes before the tops of the donut turned golden. Adjust your baking time according to your oven...

Makes 12 standard sized donuts or 20 donuts in the Demarle at Home Donut Flexi-pan*
*If using the Flexi-pan, be sure to add a little water to any empty well, before baking.

Linking with FOODIE FRIDAY!
Posted by Jane at 1:35 PM

I do not have a Flexi pan, but now you have me curious. I just have the standard donut pan, but I do love it, and being able to make my own non-fried variety. Thanks for this recipe. These look and sound delicious.

Mmm. A tasty baked donut would sure hit the spot this morning. Thanks for sharing!

These donuts look amazing! I can't believe they're baked! I need to get myself a donut pan.

Hi Jane, thanks for stopping by!
I tried this recipe too when I bought my pan. I added some chopped apples and cinnamon and apple juice.
Good, but I agree, eat them the first day!