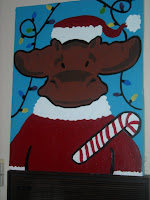 One of my sons' favorite childhood books was Tooloose, the Chocolate Moose, by Stewart Moskowitz. It's the story of a baby moose who was made of solid chocolate... "to the tips of his hooves". Poor Tooloose could not figure out what he could be when he grew up...
Not a baseball player... he'd get the ball sticky!

Not an astronaut... he'd slip out of the spaceship!

Not a steel mill worker...he'd melt!!!
As the story goes, Tooloose was walking through the woods when he slipped in his own chocolate (must have been a really warm day!) and fell through the window of Auntie Moose's kitchen, knocking over her "bowl of stuff". He felt so bad about this that he offered to make a new batch. As he cooked, he dripped lots of chocolate into "the stuff". Auntie Moose tasted it and proclaimed it to be "formidably edible". Tooloose had an ah-ha moment...he could be a dessert maker!!!!! And his signature dish became..... are you ready for this?.... CHOCOLATE MOUSSE, of course.

In a food processor (or a blender), place the chocolate chips. Process a few pulses to break them into smaller pieces. Set aside. Heat the cream in a heavy sauce pan. Bring it to the point of boiling (do not scald!!!), then pour it over the chocolate and process until smooth. Add one egg yolk at a time, processing between each addition. Add salt and vanilla. Pour the mixture into a bowl, cover and refrigerate until set and cooled.

When the base is set, whip egg whites until peaks form. Fold the egg whites into the chocolate base. Spoon into a large serving bowl or individual dishes and refrigerate until firm.
To serve, add a dollop of whipped cream and grate some chocolate on top.

***Variation: Use amaretto in place of the vanilla. Sprinkle the top of the mousse with toasted, sliced almonds.
(I often whip additional egg whites and fold them into the mousse for a lighter version.)

Stop by and check out my apron giveaway.
http://copingwithacidrefluxandulcers.blogspot.com/

Wishing you a Merry Christmas

You are so cute!

Confessions of a Plate Addict said...

Hi Jane! Yum! I love chocolate mousse! I remember years ago when I first started teaching French having to try to explain it to my kids. lol It is a favorite of mine! Thanks so much for the recipe! Merry Christmas to you and your family!...Debbie

Holly Molly, does this sound good!

I also enjoyed scrolling through some of your older posts. So nice visiting with you!

I love chocolate mousse and what a ultra-cute story to go with it!

Now I know the folks up North would think I'm nuts, but — brrrrrr…………it's cold this morning! lol

Merry Christmas Jane to you and yours!

sounds like a very cute story! Perhaps our library has it?

This sounds decadent! I will be trying it soon!
I love chocolate mousse (and it sounds especially wonderful with Ghiradelli chips! My husband just bought me a variety package of wonderful Ghiradelli squares, Eggnog, Peppermint, and Chocolate Pecan Pie, I'm in heaven!)

Very sweet to incorporate Tooloose, The Chocolate Moose! 'Loved it!
Merry Christmas!
All the best,
Eileen

This story made me laugh so much Jane. I wish I could trip in some chocolate....but I would never be able to get up that's the problem. Thanks so much for all your comments and support in 2009. Merry Xmas. Simone xx

I trying to think of an elegant dessert to make for my NY Eve dinner. Merci bien!
Happy Holidays.
Barbara

Jane, I know this book. It's so cute. Loved reading this post and love chocolate mousse! ~ Sarah

What a fun story! It made me smile and my boys will have much fun with this...I've never heard of it and now I'm on the lookout. ;) Thank you for that link to the Santa PNP!! How cool was that?! I did one for each of my boy's and they watched their own individually, completely captivated with wide eyes and speechless, lol. I wish I could have got it on video!

One of the greatest blessings from starting a blog this year is meeting you. I'm not sure if you'll ever know how much your sincere words have touched my heart and my husbands. You are a blessing to us. I know I've said that before, but I wanted to let you know again!

Linda@ Lime in the Coconut said...

Heee... Iwas really getting into the story! Chocolate mousse...oh my yum!

YUM!! Thought I'd already commented here...oh well, alzheimers is running wild in this ol' head!
Loved your lil tour! Glad to see you're back...
and hope your holidays have been fab.
Did you get your lil parcel? hope it wasn't too late!!!

Yumm! Chocolate mousse! thanks for sharing!

Yay! I finally have a few free days off to read some great blog posts! Boy! Sure have missed that!)
Hope your Christmas was a very blessed one!
Mele Kalikimaka & Hau'oli Makahiki Hou! (Hawaiian for Merry Christmas & Happy New Year!)

Too cute! Thank you for sharing the story and recipe. I will have to make this for my boys soon.

What a darling story Jane. I don't believe I've read.. going to try and find it for the grandson.. Thank you for the story and the recipe.. Happy New Year my friend...
hugs ~lynne~