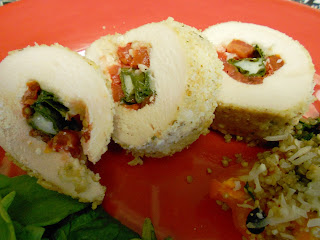 Chicken Roulades...my new favorite dish to make. Why?
Because it is so quick and easy ...and it's much more economical to prepare, than to purchase them at the meat market.

You know...I had not even thought of that until last night when one of my customers mentioned that she had just purchased 4 roulades for her family...and spent $20 on just the chicken dish! At our party, we made these tomato/spinach/Parmesan cheese stuffed roulades for under $10...and still had chicken left to make an appetizer!

The beauty of Chicken Roulades is that you can stuff them with just about anything. Chicken Cordon Bleu is a "roulade"...my Publix has these and other varieties available in the butcher shop. Other meat markets have them stuffed with crabmeat...cheddar cheese...even sausage! There are so many ways to prepare them...

The recipe for my version came from a fitness trainer...as part of the "HEALTHY COOKING" class we held last week. The original recipe required browning the roulades in a pan on the stove. But, I tweaked the recipe a bit, to use on my Demarle at Home Silpat...and to make the dish even easier! A quick dip in egg whites, mixed with a little chicken broth, then a roll in Italian Seasoned Bread Crumbs, and the roulades were ready to BAKE! You can bake these in traditional pans, but you will need to turn them during baking. But when using the Silpat and the Perforated Baking Tray, the roulades cook on both sides...in about 25 minutes! No turning....and best of all, cleanup takes just seconds with just a quick soap and water wash.

These roulades were delicious, both hot and cold. They would also make a nice heavy appetizer...

For the "Healthy Cooking Class", we served the Roulades with red peppers stuffed with quinoa and vegetables, a shrimp/mango appetizer, Portobello Mushroom "Pizza", and Fresh Blueberry/Peach Crisp. Every recipe was approved by the fitness trainer...and all the dishes were DELICOUS and HEALTHY...and they're
EVERYDAY EASY! 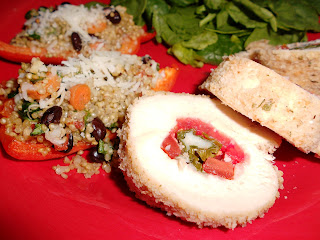 Boneless chicken breast (I used a cutlet...on sale), pounded THIN. Take the thin chicken breast...place a thin slice of fresh tomato on the breast. Add several leaves of fresh baby spinach. Sprinkle with a little shredded Parmesan cheese. Roll as tightly as you can. Fasten with toothpicks.  Dip the chicken roulade in a dish of beaten egg (or egg white) and a couple of tablespoons of chicken broth, mixed together. (Basically, you will "roll" the roulade in this mixture). Roll the roulade in Italian seasoned bread crumbs. (Light!) Place on Silpat/tray and bake at 375 for about 25 minutes (more or less, depending on the thickness of the chicken and the oven). Remove from Silpat and slice. (This is really a pretty presentation...white meat with red and green swirl)

If desired, you can make a sauce to pour over chicken...chicken broth, diced tomatoes, chopped spinach, a splash of white wine (actually calls for red wine vinegar...I think the wine would be better)and a little seasoning, such as garlic, onion, salt and pepper. Simmer while the chicken is baking...reducing the liquid. Spoon over the roulades. Sprinkle the top with a little chopped fresh basil.


I am connecting this Foodie Friday this week...check out all the fab recipes!

I thought I had made chicken every way possible. This looks so healthy and easy too.

Gee, I'm learning something new here...roulade? never knew what it was before...now I'll be looking in the Publix meat cases when we get to the seashore at the end of the month :)

That is such a wonderful looking dish! With the silpat, it is even easier to do. Love your blog Jane. So many lovely ideas here that I can make with my flexipans. Am now a follower.